Sadly I haven’t even scraped the surface of World Heritage Sites in Canada. It’s pretty expensive to travel within the country so I often find myself looking to visit a new country instead. I’ll definitely be looking to change this in the near future, especially when airlines like New Leaf are helping to make travel cheaper.

Take a look, how many have you visited?

This large piece of land on the West coast is best known for being an 11th century viking settlement. The beautiful landscape is not one to miss. In fact, for those of you that have traveled to Iceland you’ll find a similar landscape and settler artifacts here. L’Anse is the first known presence of European settlers in Canada, and possibly North America. As one who loves natural landscapes, the rugged cliffs and rolling hills are sure to please you.

This National park is preserved as it protects a portion of the Mackenzie mountains. It’s here that you’ll find one of the most outstanding rivers in North America; the South Nahanni river. With huge canyons and large waterfalls this national park shows you what Canadian landscapes are all about. The North West Territories are pretty remote and more difficult to get to; which is what makes the Nahanni National Park that much better.

The Dinosaur Provincial Park looks like the most bad ass place of all the world heritage sites in Canada. Obviously it’s gotten its name for being the destination with some of the most important fossil discoveries known to mankind. There’s been around 35 different species of dinosaur’s found here. The landscape in general of this national park looks incredible. Obviously one for the bucket list.

These world heritage site is actually four combined; Kluane, Wrangell-St. Elias, Glacier Bay and Tatshenshini-Alesk. All four make up a stretch between British Columbia, the Yukon and Alaska. You’ll find, as the name suggests lots of glaciers and high peaked mountains here. It’s also home to some pretty crazy wildlife; grizzly bears, caribou and Dall’s sheep (whatever the heck those are).

Another amazing spot in Alberta is the Head-Smashed-In Buffalo Jump. I know, I couldn’t believe the name either. This national park is home to an aboriginal camp. It’s also the home of where large amounts of buffalo skeletons can be found. The reason this park got it’s name is from an old hunting tactic the Aboriginals would use. They would chase the buffalo over the cliff, where, well, I’m sure you can imagine what happened.

To be honest I’m not even sure I could help you with the pronunciation of this world heritage site in Canada. This spot is actually an old village from Nans Dins located on a small Island in British Columbia. It’s a bit of a haunting place as it used to be home to over 300 residents but is now deserted. When disease wiped out the population in the 1880’s what is left is all that remained. It’s no easy feat getting there but once you arrive it’s apparently worth it.

The Canadian Rocky Mountain Parks World Heritage Site is actually a combination of four parks in Canada; Banff, Jasper, Kootenay and Yoho. They are also the most photographed and famous parks within Canada. Here you’ll find plenty of breathtaking and amazing hiking trails, waterfalls, lakes, ski hills, limestone caves and glaciers. I think if I had to choose only one of the World Heritage sites in Canada to visit, this would be at the top of my list. 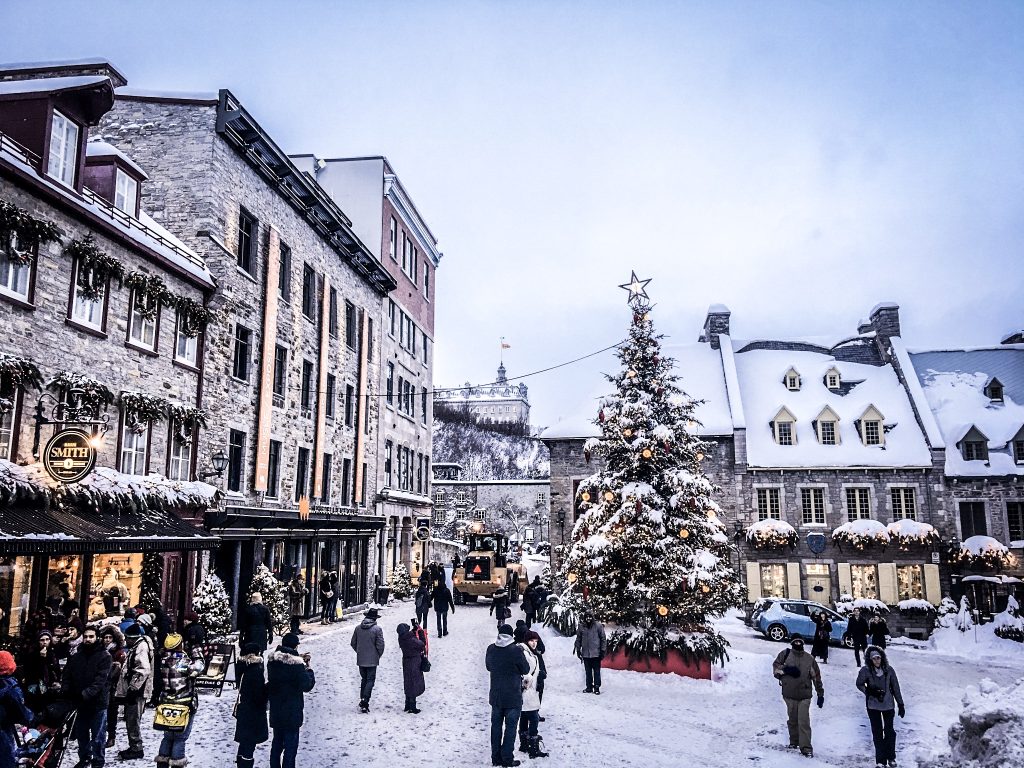 The Historic District of Old Quebec, or in short Old Quebec is as close to Europe as you can get in Canada. Built in the 17th century, this World Heritage site is a much loved and popular tourist spot in Canada. My recommendation is to visit in the winter, it’s hard to beat the romantic undertones of the freshly fallen snow and beautiful Christmas decorations in this old city. It’s a great place to visit for a weekend if you’re looking for something a little different – you won’t find anything else like it in North America.