Health risk from smoky skies off the charts in parts of B.C.

Smoke from more than 130 wildfires burning across the province is making the air hard to breathe in several B.C. communities — including "very high risk" air conditions in the mountain resort of Whistler — and it's likely to get worse before it gets better.

Kamloops in the B.C. Interior had the worst air in the province most of Wednesday, and reached 18 out of 10 on the Air Quality Health Index at about 1:00 p.m. PT, a level considered "very high risk."

The air quality there changed dramatically over the course of the day, rising from low risk levels Wednesday morning, to 18, then down to 8 in the afternoon.

By late afternoon, Whistler had the worst air conditions, hitting a 12 or "very high risk."

The Lower Mainland, though farther from the fires, has not been spared, as winds from the Interior push wildfire smoke through the valleys to the coast creating high risk conditions.

Here's how the air quality in some regions ranks on the index at 5:00 p.m. PT, for which 7 to 10 represent "high risk" conditions. Numbers higher than 10 are unusual and indicate a very high risk. 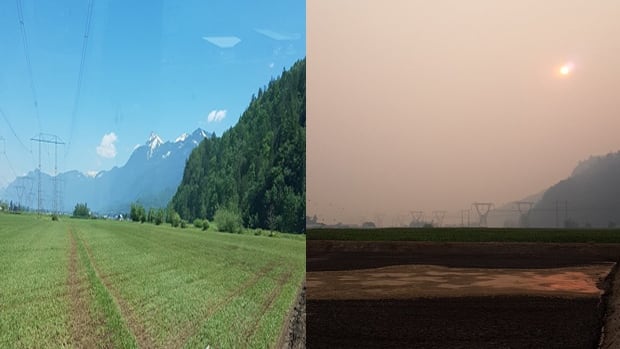 Twitter user Aaron Neels posted these comparisons from his view in Chilliwack, B.C., to show how thick the smoke is on Aug. 2, 2017. (@aaron_neels/Twitter)

"Overnight, we've had widespread smoke get mixed down and fine particulate matter levels have become elevated in many parts of the region," said Doerksen, who monitors air from West Vancouver to Hope.

"Air quality forecast models are predicting this trend to continue and air quality is likely to worsen throughout today."

Williams Lake in the Interior — where air quality last month hit an off-the-charts 36 out of 10 — was also high risk (7) as of mid-day Wednesday, though conditions were forecast to improve in that region later in the day. 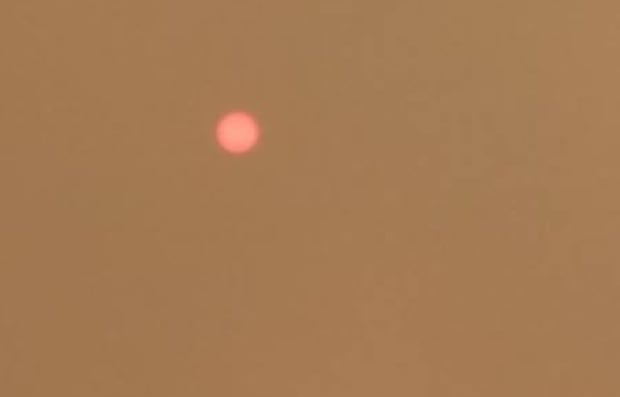 Smoke from wildfires obscures the sun in Kamloops on Tuesday. (Peter Garvey)

The key measure driving the health warnings is fine particulate matter, also known as PM 2.5, which is much smaller than the width of a human hair and can go deep into the lungs and bloodstream.

Burnaby and North Vancouver are just slightly above that threshold, while Hope had more than four times that amount as of 1 p.m. PT.

At high risk levels, vulnerable people — including children, the elderly, and those with heart or breathing problems — are advised to reduce any strenuous outdoor activities.

At very high risk levels, those groups are advised to avoid any outdoor exertion.

The general population is also asked to exercise caution and watch for symptoms like coughing and throat irritation.