‘Pokémon Go’: Why You Should Play

We’re standing at a defining moment in the history of technology.

Me? I’m standing in my pajamas at 10:30 p.m. in front of a townhouse with painted giraffes on its facade. I’m not alone, either. Four others came out for the same reason: to capture the two-headed, ostrichlike monster bouncing around on the sidewalk.

To understand how I ended up in a situation that once could’ve only been explained by psychedelic drugs, you need to know the events of the past week—how my life has become dominated by a classic videogame designed for 10-year-olds.

Niantic Labs, partnering with Nintendo and Pokémon Co., released “Pokémon Go,” a free game for iPhones and Android phones. When you launch it, you see the game franchise’s world famous “pocket monsters” as if they existed in your backyard or bathtub. The point? To “catch ’em all,” as the kids say.

This is augmented reality, or AR, where your smartphone’s camera, GPS and position sensors tell the game what to display and where. It’s a digital world layered over the real one. Unlike virtual reality, which transports you to another universe, you play in your own. 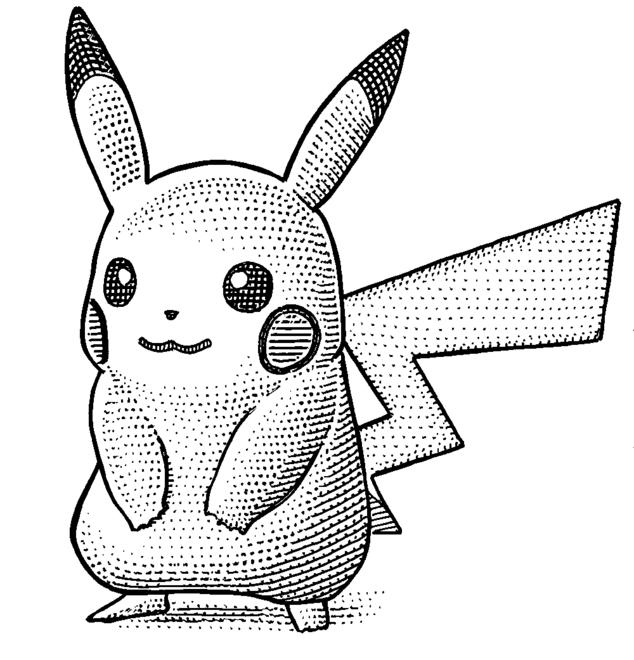 Pikachu is the most well known Pokémon.

The technology isn’t new. Smartphones have had AR games for years, and even Nintendo previously released similar features for its 3DS hand-held device. This isn’t even especially good execution of AR. Which is why perhaps not even Nintendo predicted what happened next.

Suddenly, millions of people put phone to face and began roaming their neighborhoods, hunting monsters. The frenzy led to injuries,the discovery of a dead body, even true love. Maybe they were driven by a Game Boy-era love of Pokémon, maybe just intense peer pressure.

“How about Pokémon... No?” I said at first. But I changed my mind (it was the peer pressure) and I’m glad I did. If you’ve been fighting to ignore this phenomenon, you should check it out, too. Not just because you may get to know new places or people, or because you may enjoy the charming absurdity of little monsters dancing on your desk. It’s time to witness the power of augmented reality, which connects us to others and our environment in a way no technology has before.

Poking at the App

I’m fairly certain I only understand 50% of “Pokémon Go,” but what I do understand I learned almost entirely from complete strangers ages 10 to 30. New Yorkers may scream at you for making eye contact on a cramped subway, but ask if they’ve seen a Psyduck around and they’ll lead you right to it.

In ‘Pokémon Go,’ Pokémon are overlaid in your environment.

What the heck is a Psyduck? It’s one of hundreds of adorable types of monsters you can catch. (No, they don’t all look like the classic yellow Pikachu.) You collect them to become the ultimate Pokémon trainer. Yes, you care for them with the end goal of putting them in a fighting ring.

How do you do that? With some cool tech tricks:

•Capture Pokémon —The “Pokémon Go” app starts like Google Maps, plotting your location on a virtual landscape. You’ll see real parks, buildings and roads. Pokémon won’t pop up in the middle of a busy street, but they will appear around you. Tapping one launches your phone’s camera, and you’ll see the creature overlaid in your environment. Below it is a small red and white Poké Ball. Aim your phone at the monster, swipe the ball toward it and, boom, you’ve caught it!

•Get Poké Balls —Poké Balls are why I visited that giraffe building. You can buy them in the app for $1, or you can get them free by visiting PokéStops—historical points of interest and other landmarks. It’s been fascinating to stop at places I pass every day but never really look at. 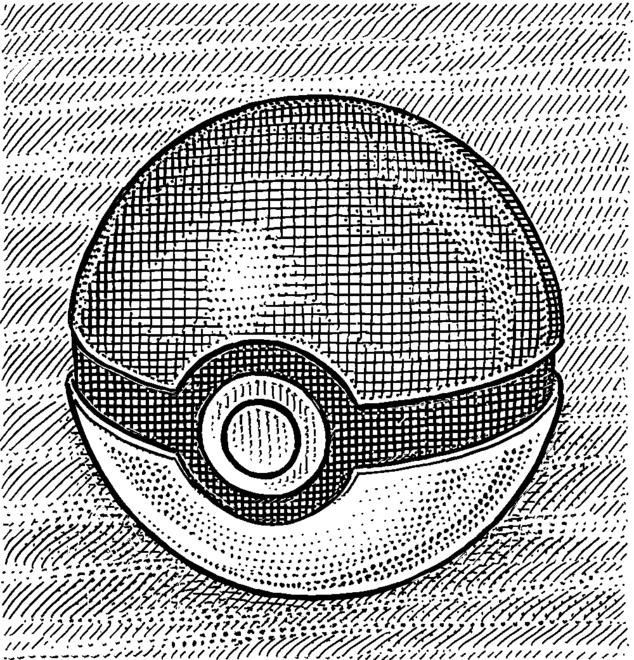 When you near a PokéStop, marked by a blue tower on the map, you can collect Poké Balls and other goodies, like eggs. An egg will hatch into a Pokémon only if you walk. Depending on the egg, that could be one to six real miles. Welcome to the Pokémon weight-loss program.

•Battle Pokémon—Once you’ve played a while, you can go to another real-life location: a gym. This is where your Pokémon get in the ring for battle. (Soon, Niantic intends to let you interact with other people’s Pokémon.) At the gyms, I’ve met interesting people I otherwise would never have chatted with. Once they picked up their heads from their phones, that is.

Poking at Your Safety

It isn’t all just fun and Weedles. (Caterpillars that look like they’re wearing birthday hats, duh!) You should always take precautions when letting a digital service know your real-world location.

Some of it’s common sense: Don’t stop in the middle of a street to catch a nonexistent monster. (Niantic doesn’t plop them on roadways but you might spot one while you’re crossing the street.) The game is designed so you have time to look at your phone safely. At public spots, be aware of your surroundings. Police have already reported Pokémon-related muggings. At a gym in Central Park, I watched some teenagers carefully move away from an unusual, older male player. Beware of strangers playing “Pokémon Go”—it’s this summer’s equivalent of “Beware of strangers with candy.”

As for your digital security, bear in mind that Niantic and Nintendo collect some personal data, including IP address and your location, while using the app. When you sign up for the game, your best bet is your Google account, given the current instability of the Pokémon Trainer Club account registration. Previously, an app error caused iPhone users to inadvertently grant full account access to Niantic when logging in with a Google account, but that problem was patched.

Poking at the Future

The “Pokémon Go” furor will soon die down. What’s captured all this attention isn’t so much the excitement of little monsters; it’s how the game blends the world down in our smartphones with the one we see when we look up. It’s a more social kind of social media.

That’s the key difference between VR and AR. VR headsets, like the Oculus Rift or HTC Vive, transport you to a location—whether it be a house you’re eyeing or the courtside NBA seats you’ve always wanted. In actuality, you could be all alone, in a dark basement. VR doesn’t care.

Augmented reality brings new digital interactions to your actual location. It would get very boring down in that basement. Lonely, too.

“So much technology works against social interactions,” says Eric Klopfer, an MIT professor of education. “When we think about what kids need to learn, it’s navigating the world with peers and working effectively in teams.”

That’s what I’ve witnessed this week, digitally enhanced social interaction that’s all the more impressive when you realize how primitive the current technology is. Seriously, holding a phone in front of your face gets old. That’s why AR is moving to the headset. 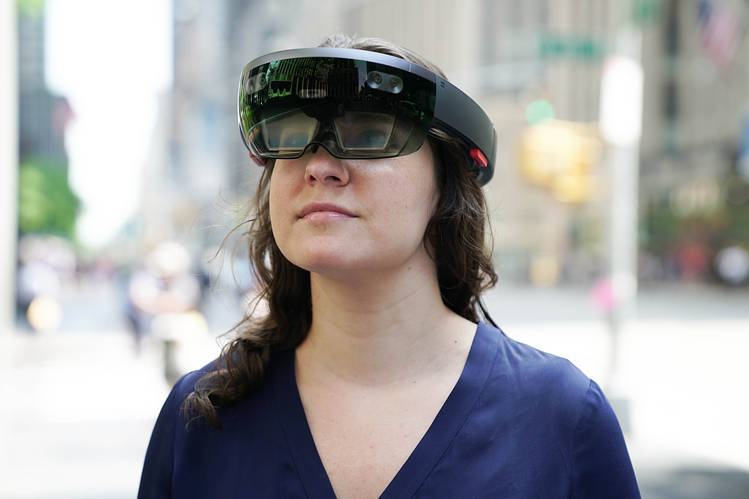 With an early version of Microsoft’s HoloLens strapped to my head, I could see 3-D menus on my office wall and interact with a little pirate hovering over my desk just by gesturing in the air. What struck me was how present I still felt in the real world. I could see my hands and say hello to passing officemates. In fact, a colleague and I, both wearing HoloLenses, could interact with the same creation.

The realism of AR will improve, too. Google’s Project Tango , arriving soon on smartphones, can help AR gain perspective—a Pokémon hiding under the bed, for instance—with 3-D visual tracking. And all eyes are on Magic Leap, a heavily funded startup that promises to project digital objects into the real world using some mysterious technology that few have ever tried.

“Technology is no value on its own,” says Jaron Lanier, a computer scientist who is regarded as the father of VR. “It’s always about how it fits into people’s lives.” For millions, inexplicably, Pokémon was the fit. Need proof? I just saw a grown man in a suit and tie jump a fence to catch a fluffy bug-eyed Venonat.