Why the risk of the 'Big One' in B.C. is heightened every 14 months

That's because she knows the chances are higher of a big earthquake striking.

Almost like clockwork, thousands of tiny tremors rumble unfelt across the Pacific Northwest indicating a 'slow-slip' event is taking place.

Bird, an earthquake seismologist for the Geological Survey of Canada, says it's something scientists discovered at the office in Victoria when they noticed an unusual pattern on seismograms.

"Every 14 months or so there's a sudden reversal of movement [of Vancouver island] for a couple of weeks," she said

"It's buckling in that one direction but suddenly it settles a little bit ... it could be a last straw scenario, [where] just that little bit of extra stress that's going to cause that rupture to trigger ... the megathrust earthquake." 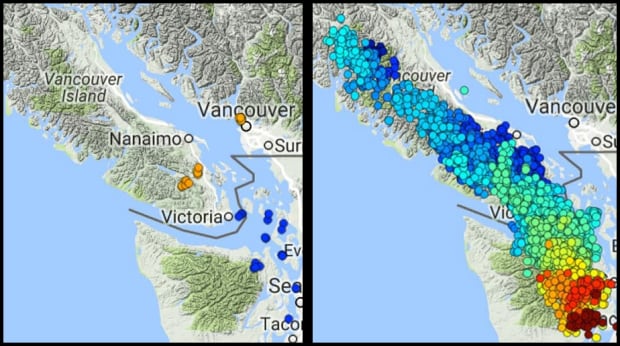 The Cascadia Subduction Zone is a 1000 km fault that runs from Northern Vancouver Island to Northern California. The fault itself is a boundary between two tectonic plates: the Juan de Fuca tectonic plate is moving towards, and getting shoved under the North American plate that we live on.

A section of that boundary has become locked together — the plates are no longer sliding smoothly. So all that forward movement is being stored up inside the rocks, waiting for the day that the energy will be released as a catastrophic megathrust earthquake, colloquially known on the Pacific Northwest as the 'Big One'.

But why is there a heightened concern that the 'Big One' will happen during a slow slip?

"What we think is happening is that whenever there's that reversal, for those two weeks it's loading extra stress onto the locked zone," she said.

"So if that lock zone is close to critical, and you're loading mild stress on to it ... just that little bit of extra stress could cause that rupture to trigger."

When's the next slow slip?

The last time the signature showed up on seismograms around B.C. was the end of December 2015 to the beginning of January 2016.

That would mean the next slow slip event will happen sometime around February 2017.

But don't wait until then — get an earthquake kit and plan in place right now. A medium-sized earthquake could happen at any time.

Meanwhile Bird does her part to feel empowered instead of scared.

"Everyone [in my family] has shoes and a flashlight under their bed. Everyone knows where we're going. It's just one of those things, where everyone gets the lecture beforehand."

Slow slips around the world

B.C. scientists aren't the only ones studying slow-slip. Japan has the same kind of locked tectonic plate scenario, and they have been getting these 'clues' that indicate a heightened risk of an earthquake every one to six years.

A recent major study from their seismologists correlated every large earthquake to a slow-slip event that was happening at the time — including the 2011 Tohoku earthquake.

John Vidale is a seismologist at the University of Washington and says that our slow slip events are like clockwork.

"Slow slip in Cascadia is some of the loudest, most periodic in recurrence, and best studied in the world. As GPS measurements revealed ... the plate boundary ... is stuck for 11–15 months, then moves relatively quickly for several weeks. The cycle is remarkably close to periodic." 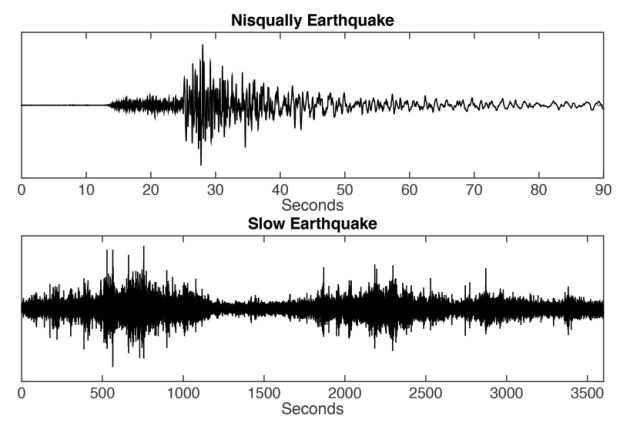 The top seismogram is from the 2001 M6.8 earthquake in Washington. The bottom recording shows the ground motion from a slow slip tremor. (Pacific Northwest Seismic Network)

So if we know exactly when these events start and we know they correlate to big earthquakes, shouldn't we be sounding the alarm every 14 months?

Bird says that the information is available on their website, and they used to send out press briefings all the time, but it's hard to get people interested in an event that happens so regularly with no impact. 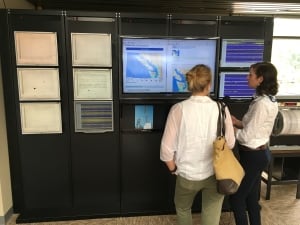 She said that one of her colleagues likens it to the heightened risk of getting into a car accident.

"Going for a drive in the country on a Sunday, you're not that likely to be in a car accident. But if it's rush hour in Vancouver and there's a game on ... you're more likely to be in an accident. You're not necessarily going to be, but the probabilities are higher," she said.

However, some emergency managers use the slow slip cycle to retrain their team or to get their communities prepared for earthquakes. And if they happen to be freshly trained or in the process of training when the 'Big One' does happen, they are that much sharper and ready for action.